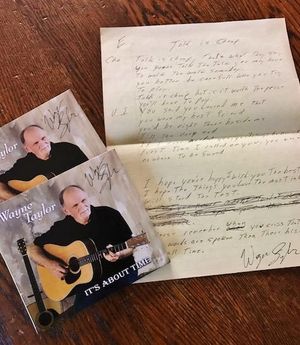 The CBC Bluegrass Festival is the camp's primary annual fundraiser, in its sixth year, with Blue Highway headlining the upcoming event in Mocksville this Saturday, September 9, 2017.

A Silent Auction will occur at the festival site on September 9 from 10:00 am - 4:00 pm.   Artists participating in this year's and past events were invited to contribute items to the Silent Auction, with all proceeds benefiting the camp.

The auction has been expanded this week due to the unexpected generosity of Blue Highway band members Tim Stafford and Wayne Taylor, who surprised festival Executive Director Lisa De Maio Brewer with once-in-a-life time items -- the original lyric sheets from the writing sessions of some of Blue Highway's most beloved songs, like Nothin' But a Whippoorwill and Talk Is Cheap.

An On-line Auction was quickly set up this week by T. Kyle Swicegood of The Swicegood Group, and all the items which will be part of the Silent Auction this Saturday are also now available to the general public for On-line Bidding.

The auction may be accessed at www.ready2bid.com by selecting the Carolina Bible Camp Auction event.

"I am not ashamed to say I cried when I opened Wayne's envelope and saw what it contained. I just can't get over Tim and Wayne. What an amazing display of generosity," shared Lisa De Maio Brewer.

"Lisa Brewer and the folks at the Carolina Bible Camp festival are some of our favorite people in the business. I'm happy to donate these signed lyric sheets, some of which are originals from the day of composition," said Tim Stafford.

Blue Highway's contributions to the auction include:

It's a once in a lifetime opportunity for Blue Highway fans to own a piece of history ~ the handwritten lyric sheets to some of Blue Highway's most popular songs ~ and all for a great cause!

The CBC Bluegrass Festival will take place at the Carolina Bible Camp at 1988 Jericho Road in Mocksville, NC, on Saturday, September 9, 2017.   Tickets will be available at the Gate on day of show for $20, or in advance on-line for $15 at www.CBCBluegrass.com/tickets.

The Silent and On-line Auctions will end on Saturday, September 9, at 4:00 pm, with winners announced shortly thereafter.

For more information on the CBC Festival, please go to www.CBCBluegrass.com.