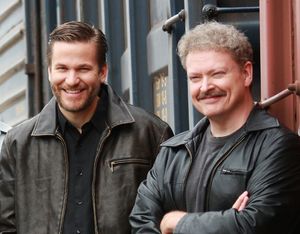 RALEIGH, NC (October 4, 2014) -- Powerhouse band Blue Highway members Tim Stafford and Rob Ickes were among the award winners as the brightest stars in Bluegrass gathered on Thursday evening for the 25th Annual IBMA Awards at Raleigh's Duke Energy Center for the Performing Arts.

Tim Stafford took home the 2014 International Bluegrass Music Association Songwriter of the Year Award.   Rob Ickes and Claire Lynch were special guests on a Special Consensus recording of Wild Montana Skies which was named 2014 IBMA Recorded Event of the Year.

Tim Stafford co-founded Blue Highway, and is a gifted songwriter, guitarist, vocalist, producer, session musician and collegiate instructor, who added author to his list of accolades with the recent release of an acclaimed Tony Rice biography which he co-authored with Caroline Wright.  A former member of world-renowned Alison Krauss and Union Station, Tim released his second solo album, Just to Hear the Whistle Blow, in July to rave reviews and immediate chart action, and was also a nominee in this year's IBMA Awards for Guitar Player of the Year.

Of his award win, Tim shared:  "I'm deeply honored to receive the IBMA Songwriter of the Year Award. Songwriters are a huge part of Bluegrass music, and I'm just proud to be part of that vital and growing scene."

Rob Ickes is the most awarded instrumentalist in the history of IBMA, with a staggering 15  honors as Dobro Player of the Year.  Rob has played on recordings with artists from Merle Haggard to Dolly Parton, and David Lee Roth to Mary Chapin Carpenter. When Alan Jackson assembled his dream team for his acclaimed Bluegrass Album, he wanted Rob Ickes on dobro, and Rob played in Jackson's all-star band from Nashville's famed Station Inn all the way to Carnegie Hall.  The Grammy-winning Ickes just released a hot-selling collaborative dobro album entitled Three Bells in mid-September with IBMA Awards co-host Jerry Douglas and the beloved late Mike Auldridge.

Of his IBMA Award win on Special Consensus' special team, Rob shared:  "Very happy for Greg (Cahill) and Special Consensus! Greg has dedicated his life to this music, and it was great to see him honored Thursday night.  It was a fun session, and I was tickled to be a part of the recording!"

Blue Highway, as an Entertainer of the Year nominee among their 9 nominations, performed near the close of the Awards Show, with Shawn Lane lending lead vocals to the poignant Just to Have a Job from Blue Highway's #1 chart-topping IBMA Album of the Year nominated Rounder Records release, The Game.  Shawn Lane was also invited to sing and play fiddle with Awards Show co-host Lee Ann Womack in her performance on the program.

The multi-award winning Blue Highway is 20 years strong with all original members still intact with Jason Burleson on banjo, Rob Ickes on dobro, Shawn Lane on mandolin and fiddle, Tim Stafford on guitar, and Wayne Taylor on bass.