Blue Highway Soars to #1 with First Song from New Album 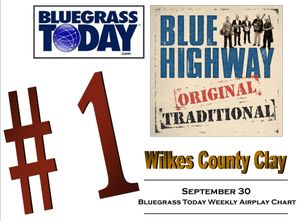 The 22-year strong powerhouse Blue Highway has taken each of their 10 prior studio albums to #1 on multiple charts, but this is the first song to go #1 from their newest album released just 3 weeks ago today.   The song debuted last week and skyrocketed to #1 today.

Also charting today at #17 was Blue Highway's "The Story of My Life" written by Wayne Taylor.

Blue Highway's last album "The Game" reigned at # 1 for seven consecutive months on the Bluegrass Unlimited Album Chart, and was nominated for 2014 IBMA Album of the Year.

Blue Highway will appear on News 5 at Noon on WCYB-TV in Bristol, VA, on Thursday, October 6, at 12 Noon ET to perform songs from their new album.  The show may be watched via Live Stream at www.wcyb.com/news/live-stream.