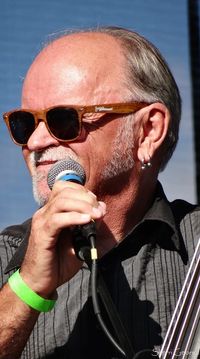 BRISTOL, VA (September 19, 2016)  – Blue Highway’s highly respected bass player, songwriter, and vocalist Wayne Taylor will be honored as the 2016 Inductee into the Virginia Country Music Hall of Fame in a ceremony to be held at the Chesterfield County Fairgrounds at 10300 Courthouse Road in Chesterfield, VA, on Saturday, October 8, at 7:00 pm.

One artist or band who has significantly contributed to country or bluegrass music is chosen annually by a board sanctioned by the Governor of Virginia, with past inductees including legends such as Patsy Cline, the Statler Brothers, Dr. Ralph Stanley, Jimmy Dean, Mother Maybelle Carter, and Roy Clark.

The Executive Board of the Virginia Folk Music Association (VFMA) selected Wayne Taylor as the 2016 Virginia Country Music Hall of Fame Inductee, and Governor Terry McAuliffe will sign a congratulatory letter to accompany the induction proclamation, according to board member Yvon Jackson.

A child of humble parents, Wayne overcame four early years spent on crutches and in a wheelchair to become a coal truck driver in the mountains of southwest Virginia for 18 long years before a golden door opened for him to become a founding member of one the most influential and respected bluegrass bands in modern history, Blue Highway.

Wayne’s musical path started when his cousin taught him two chords on a guitar as a teenager.  As an adult, Taylor played in garage bands at night, in a gospel group called The Christian Heirs, and in several regional bluegrass bands, which led to his friendship with Tim Stafford.  Tim and Wayne, along with Shawn Lane, Jason Burleson, and Rob Ickes, formed Blue Highway in 1994.

Blue Highway was also recently voted the Favorite Bluegrass Artist of All Time in April 2016 by the readers of Bluegrass Today.

“I want to thank the Virginia Folk Music Association for this honor,” Taylor said. “This took me completely by surprise. I never imagined I’d be named in that group, with people like Patsy Cline – that’s the greatest honor in the world.”

Taylor’s formal induction will be on October 8 during the 18th Annual Jumping Bluegrass Festival, an October event created by the VFMA in 1998 to host each year’s Hall of Fame Induction Ceremony and help preserve the heritage of country, bluegrass and gospel music.  Wayne will be inducted into the Virginia Country Music Hall of Fame at 7:00 pm, followed by a performance by Taylor and Blue Highway.

Tickets for the four-day Jumping Bluegrass Festival are $40 prior to October 1, with single-day tickets ranging from $10-$20.  Single-day tickets for Saturday, October 8, the day of Taylor’s induction, are $20 each.  For more ticket info, please go to www.VAFolkMusic.org, or call 804-832-0950.

For more information on the Virginia Country Music Hall of Fame, please go to:  www.vafolkmusic.org/Page8.html

Wayne Allan Taylor was born on January 2, 1955, in Richmond, Virginia, the first child of Dallas and Freda Taylor. Dallas was a hard-working farmer and truck driver, while Freda was a devoted housewife and mother.

When Wayne was two years old, the Taylor family moved to the heart of the coal fields in Richlands, VA. Shortly after, Wayne's father moved his family to the small farming community of Butler in central Ohio, where Wayne’s paternal grandfather lived.

At age seven, Wayne started school at Butler Elementary as the smallest student in the class. After 11 years in Ohio, when Wayne was 13 years old, the Taylors moved back to the coal country of Richlands, VA.

Due to health issues, young Wayne spent four years alternating between a wheel chair and crutches. During this difficult time, he spent numerous months in hospitals in Bluefield, WV, Durham, NC, and Charlottesville, VA. It was during this time, one of Wayne’s cousins taught him two chords on the guitar. The rest as they say is history.

In 1972, Wayne graduated from Honaker High School in Honaker, VA. Wayne started working at Honaker's Modern Chevrolet in the Parts Department where he stayed for a couple of years. He then went to work as a Dispatcher for the Honaker Police and Fire Departments and Rescue Squad, where he worked for 2 1/2 years. Wayne went on to drive a coal truck in the coal fields of southwest Virginia for the next 18 years.

During this period, Wayne played in several garage bands in his spare time, as well as playing in a gospel group called The Christian Heirs.

Hearing the original Seldom Scene for the first time was a turning point for Wayne. He had never heard Bluegrass sound like that. After playing in several local and regional Bluegrass bands, he became friends with Tim Stafford. Tim and Wayne, along with Shawn Lane, Jason Burleson, and Rob Ickes, formed Blue Highway in 1994.

Blue Highway went on to become a 22-year strong, internationally heralded band, known perhaps as much for their humility and character as for their instrumental, vocal, and songwriting prowess.

One of the most respected and awarded bands in the Bluegrass genre, Blue Highway has earned 25 IBMA Awards, 6 SPBGMA Awards, one Dove Award, and two prestigious Grammy Nominations as a band.

Blue Highway was also voted the Favorite Bluegrass Artist of All Time in April 2016 by the readers of Bluegrass Today.

Some of the most popular songs Taylor has written for Blue Highway include Lonesome Pine, Danville Pike, Keen Mountain Prison, Only Seventeen, No Home to Go Home To, and Talk Is Cheap.  Wayne also co-wrote heart-touching songs for the band with Larry Shell and the late legendary songwriter Kim Williams such as Seven Sundays in a Row and My Heart Was Made to Love You.

From overcoming a wheelchair and emerging from driving a coal truck, to having one of the most beloved voices and bands in the Bluegrass genre, Wayne has also been blessed to emerge victorious over both colon cancer in 2002, and heart attacks in 2000 and 2016. Recently returning to touring with Blue Highway following heart surgery in May 2016, he is still out on the road doing what he loves, a feat he humbly credits to the grace of God.

Wayne Taylor is genuinely honored to be the 2016 Inductee into the Virginia Country Music Hall of Fame.