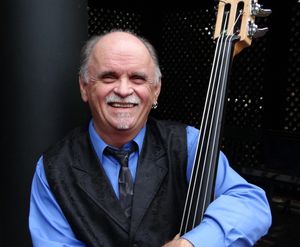 TAZEWELL, VA (June 29, 2017) -- On the heels of being inducted into the Virginia Country Music Hall of Fame last Fall, the gifted vocalist, songwriter, and bass player Wayne Taylor of the multi-award winning, highly respected band Blue Highway is being honored with a Lifetime Achievement Award at the 15th Annual Tazewell County Fiddlers Convention on Saturday, July 15, at 6:30 pm, at the Historic Crab Orchard Museum & Pioneer Park.

"The Lifetime Achievement Award recognizes those who have made a significant impact toward preserving Traditional Mountain Music in Tazewell and Southwest Virginia," said Whitted.  "We are proud to welcome bluegrass legend Wayne Taylor to our list of honorees.  Wayne's humble approach to music and giving spirit pushed him to the top of the Nominees List this year.  He will make a worthy addition."

A child of humble parents, Wayne overcame four early years spent on crutches and in a wheelchair to become a coal truck driver in the mountains of southwest Virginia for 18 years before a golden door opened for him to become a founding member of what would become one of the most awarded and influential contemporary bluegrass bands in modern history, Blue Highway.

Wayne is often credited with giving Blue Highway its "inimitable" sound.  Taylor is a highly respected vocalist, songwriter, and bass player, earning honors as SPBGMA Bass Player of the Year in 2001.   Wayne was recently honored as the 2016 Inductee into the Virginia Country Music Hall of Fame, alongside legends such as Patsy Cline, The Statler Brothers, and Roy Clark.

Taylor's songs have filled Blue Highway's albums from the band's first release in 1995, with songs from the rollicking Riding the Danville Pike to the toe-tapping Lonesome Pine and Talk is Cheap, to the deep perennial fan-favorites Keen Mountain Prison,  No Home to Go Home To, That Could Be You, Homeless Man, Only Seventeen, and Seven Sundays In A Row, which was co-written by Kim Williams and Larry Shell and nominated as 2004 IBMA Song of the Year.

The gifted songwriting and pure vocals of Wayne Taylor, Tim Stafford, and Shawn Lane have been like rocket fuel for Blue Highway, helping skyrocket each of their 11 studio albums to #1, with their most recent album 'Original Traditional' earning a 2017 Grammy Nomination for Best Bluegrass Album.   Their last album 'The Game' reigned at #1 for 7 consecutive months on the Bluegrass Unlimited Album Chart, helping Blue Highway chart the Most Radio Airplay of Any Bluegrass Artist in 2014.   Blue Highway was also voted the Favorite Bluegrass Artist of All Time in April 2016 by the readers of Bluegrass Today.

Weekend Passes are $12, with Single Day Passes $7 for Friday or Saturday.   All events are FREE for children 12 and under with an accompanying paying adult.  Camping is also available on site.  For more information, please call  276-988-6755 or email:  info@craborchardmuseum.com

For more information on Wayne Taylor and Blue Highway, please go to www.BlueHighwayBand.com.