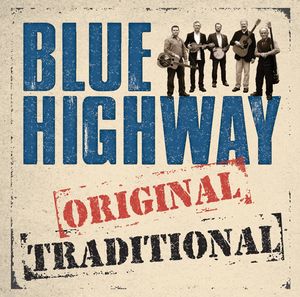 NASHVILLE, TN (September 9, 2016) -- Original Traditional is a record that Blue Highway has been intending to make for years, and it’s well worth the wait: a combination of unique concept album and a continuation of the band’s songwriting legacy. According to Tim Stafford, speaking on behalf of the band, they had more than enough material for their next record, and tried to figure out a way of choosing and organizing what tunes they wanted to record. Then the light bulb went on, bringing to mind the “missing record” they had thought about doing, off and on, and they realized this was it!

There is not another record so conceived, partially because it’s hard to think of another contemporary bluegrass band that could pull it off, with roots deep enough in traditional bluegrass, and the songwriting chops to make it work. But here it is: an entire album that has the sound of an earlier time, both musically and thematically, but that is comprised entirely of new, previously unrecorded originals from Blue Highway itself. As such, it is unique not only in Blue Highway’s recorded output, but among records from their peers.

Blue Highway is a remarkable band in so many ways that it’s daunting to even know where to begin. First, there are few bands that have achieved the stature, respect, and awe with which they are viewed both by fans and by members of the bluegrass community generally. Granted, they have endured while others have faltered, and have only grown stronger and more acclaimed with each record. Yet still they possess the power to surprise, which is indeed precisely what they have done in spades on Original Traditional.

Beloved by progressives and purists alike, a rare quality among bluegrass bands today, Blue Highway set out to do an album of original songs. . . but within a more traditional framework than is often associated with them. Known for their “bend it, don’t break it” approach, the band has delivered an album that will set standards for years to come. Music writer Dan Mullins, who wrote the liner notes for the album, enthused, “Blue Highway’s self-containing goal of creating original music within a more traditional framework than ever before, produced a beautiful album filled with personality and passion.”

If any Blue Highway album perfectly exemplifies “the essence of bluegrass music,” this one is it, combining the spirit, themes, and topics of traditional bluegrass but through a set of all-new originals from the band and co-writers, Original Traditional may well be the record that everyone has been waiting for from Blue Highway. From callous killings to struggling with sobriety to the majesty and magic of the mountains, the songs evoke the timeless quality of bluegrass past, but with the voices and instrumental prowess of Blue Highway present, capturing a contemporary group at its creative peak.

During their years together, Blue Highway has maintained an unusually high level of excellence in their music, consistently turning out bluegrass that’s characteristically true to the principles of the genre while remaining both memorable and original. Amazingly, the original personnel from the band (which formed in 1994) remains intact, a remarkable achievement in itself, given the frequent mixing and matching of personnel that is more the norm (banjo player Jason Burleson did leave for a short period early on, but soon returned to the band). The only exception to that is the substitution on Dobro of talented newcomer Gaven Largent, already doing an inspiring job of stepping into Rob Ickes’s big shoes, and indeed making his own mark. He makes his Blue Highway debut recording with Original Traditional, doing it seamlessly.

The band’s remarkable chemistry was, according to the individual band members, evident from the start, and accounts in large part for their longevity. From a somewhat haphazard beginning—the band initially formed primarily to play weekend gigs, but quickly grew into something else— developing into a powerful and popular group with a compelling, immediately recognizable sound.

Guitarist Tim Stafford, a native of Kingsport, Tennessee, smack in the middle of one of the cradles of country music, had just left Alison Krauss and Union Station. He was road weary, a new father, and unsure of the next step in his personal evolution. Searching for ways to remain connected to the music, Tim consented to do an article on a band for Bluegrass Unlimited, met Wayne Taylor, a member of that band, and was impressed enough with Taylor’s talents as a bassist and singer to begin thinking about some day forming a band with him. That band became Blue Highway in relatively short order.

At East Tennessee State University at the time of its famed bluegrass curriculum, though he was a history major, Stafford was and is a historian of the music in a very real sense. He brings that sensibility to every Blue Highway recording. His amazingly fluid guitar style is much admired as well, as is his lead and harmony singing and songwriting chops. For this album, Tim has as usual come up great songs, “She Ain’t Worth It,” “Wilkes County Clay,” and “If Lonesome Don’t Kill Me,” which feature his bluesy attitude that is both laidback and compelling. “Last Time I’ll Ever Leave This Town” is in a long tradition of leaving behind a coal mining town, where there is no future but more heartbreak.

Blue Highway is also fairly unique in being one of the very few bands with three lead singers, each contributing his own distinctive voice and personality to each song, each of them being a songwriter as well. In addition to Tim Stafford’s lead singing, that of Shawn Lane is equally well-respected and acclaimed. On Original Traditional, he has brought “Don’t Weep For Me,” “What You Wanted,” “A Long Row to Hoe,” and “Top of the Ridge.” “Don’t Weep For Me” could well be an old-timey murder ballad, complete with retribution and hanging. “A Long Row to Hoe” is an ode ti the farmer, and “Top of the Ridge,” a song of redemption, “no need to worry about the things I miss/I’ll see a whole lot better from the top of the ridge,” lovely in its simplicity.

Shawn’s “lonesomeness” is showcased on them all, but perhaps even more, on “Don’t Weep For Me,” a song that sounds so Ralph Stanley-ish in its traditionalism that it was in fact previously recorded a cappella by Stanley himself. Here, it’s given the full band treatment that brings the song to life in new ways. A veteran of both Doyle Lawson’s and Ricky Skaggs’s bands, prized for his voice as well as his mandolin and fiddle virtuosity, Lane has been a key component of the Blue Highway sound, and has contributed many outstanding original songs to the band’s oeuvre.

Jason Burleson, from rural North Carolina, rounds out Blue Highway with his powerful banjo playing, though he also is a noted multi-instrumentalist, not limited to bluegrass. His knowledge of string band jazz and other forms of music runs deep, and his musical sophistication is reflected in his original tunes in the band’s repertoire, a wonderful example of which is the new instrumental, “Alexander’s Run,” on this album.

The band collectively mentions their fondness for the music of progressive bluegrass giants Tony Rice, David Grisman, JD Crowe, and Bela Fleck, among others. Burleson says that one secret to the band’s success is

that it is a democratic outfit, without a single leader. Tim Stafford points out that with a truly democratic five-member band, there is a built-in tiebreaker in every vote. ”We are very much like a little family,” Tim goes on, ”just one that doesn’t see each other all the time.”

The band is scattered over the southeast, from Virginia to South Carolina to North Carolina to east Tennessee to Nashville. They have never felt the necessity of being road dogs, to the extent that they hit it for 200 days a year. “We decided early on that we’d rather own our own homes than own a bus together,” says Burleson, laughing.

In discussing the reasons why the band has lasted for more than twenty years now, one is struck by the unanimity in the names mentioned as influences by the band’s members. Wayne Taylor, originally from Virginia and familiar early on with the traditional bluegrass sound, turned away from the music for a time, but was brought back upon hearing the Seldom Scene. Taylor says he tells the Scene’s Ben Eldridge that he is at least partially responsible for whatever he has become musically, when after eighteen years of driving a coal truck, he joined the fledgling Blue Highway. Taylor’s resonant lead voice is one of the wonders of the bluegrass world, the perfect instrument for expressing his own songs. On this album, his directness and emotional power come through loud and clear on “Water From the Stone,” “Last Time I’ll Ever Leave This Town,” and “The Story of My Life. As dependable and solid as ever, his strong bass playing nails the band’s pulse in place.

Every member of the band expresses in one way or another the importance of having a band full of writers. “The original material is a huge asset for the group,” says Stafford, “and it is always fun to come together and see what everyone has. I do enjoy those times. There has never been a bluegrass band with this many writers and singers that does mostly all original material, so it’s special.” Additionally, this is a band that has been known for its gospel repertoire as well, with this album featuring another sacred harp classic given Blue Highway’s stellar vocal harmony treatment, destined to be a modern day masterpiece for the band. As liner notes writer Daniel Mullins summed it up, With ‘Original Traditional,’ Blue Highway chose to look ahead by looking back.” In so doing, they have never sounded better!